Got an electrical gremlin? Ask the question here.
Post Reply
3 posts • Page 1 of 1 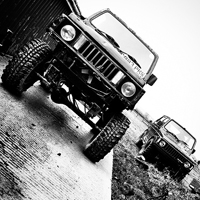 I'd recently been looking for an alternator upgrade for the Zuk but couldn't really find very much that offered a decent step up but also bolted in directly. I'd read a few posts about Tranist alternator upgrades but none of them were particularly comprehensive and none listed part numbers etc.

I have a 1600 16v swapped into a Samurai. The stock 1600 alternator is 50a which seemed to just about be able to run the stock electrics but I have fitted electric seats and will probably be looking at additional lighting and a compressor for a locker at some point so needed something more than the stock alternator. When I had the heaters running, the electric seats on, and full beam lit up, the battery would drain quicker than it would charge with the stock unit.

Long story short, I bought or borrowed many different alternators until I could find one that would be a decent step up but that could also be fitted easily. In the end I found a Nissan unit which was a near enough direct fitment but with an 80amp output - 30amps more than the original one.

As I said, I have a 1600 16v, I have no idea if this will fit any other Suzuki engines but next time I look at someones truck I'll make a guess at what other engines it will likely fit.

The plugs on the Suzuki alternator and the Nissan alternator are different in design. I didn't want to cut my loom so I could always throw the stock item back on in an emergency. I bought two plugs and made a little adapter harness. The only other thing you need is a 12mm spacer to space out the bracket on the block to the arm on the altenator. I mahcined one on my lathe but you can just use a stack of washers if you don't have access to a lathe.

Anyway, here are all the parts you need in order to do the 80amp alternator upgrade yourself:

You need this alternator.

You need this plug, and this plug. Cut them together to make a small adaptor harness.

You need a spacer like this or a small stack of washers. My spacer is roughly 20mm in diameter, 12mm thick, and has an 8mm hole through the middle.

I forgot to note down the correct belt you need but will do that tomorrow and update the post.

Caveat: This Nissan alternator is from a CA18DET engine as fitted to things like a 200SX/Silvia etc. The DET suffix on Nissan engines denotes a turbocharged version. There are several other CA18 variants that are not turbocharged. The alternators from these CA engines are completely different and will not fit.

I also suspect that there will be other Nissan engines that may well have suitable donor alternators which will both be higher amperage and fit. I have quite a bit of Nissan stuff so will update this post if I work out other alternators that fit because these ones from the CA18DETs are getting a little rarer.

Here's the finished thing. Works perfectly and has plenty of amperage so far. You can see the small plug adaptor harness in place too. 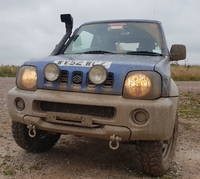 I'm still waiting to see your RB engine in it! ;-) Great guide!