Not covered by any of categories below, want a winch or need to buy some recovery gear then your question goes in here!

You will also find online parts catalogues, Service manuals and a other useful info here.
Post Reply
2 posts • Page 1 of 1 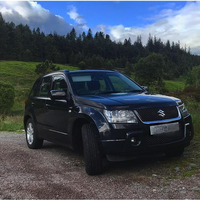 Hello everyone, Im a newbie just joined today! (sorry if this is in the wrong category) if it is feel free to point me in the right direction!
I have a 2009 Vitara, manual, 2 litre diesel. The body work above and below is immaculate as is all the running gear. I bought the car in june 2020, drove it back home over 100 miles with no problem, didnt skip a beat. (apart from the clutch pedal falling to the floor) once the clutch was fixed i drove it as a daily car never skipped a beat, wasnt just driven around towns as i live in the country so every time i used it it had a proper run. After about a month or so it suddenly started going into limp mode once ( the first time ) i kept driving it as you do, as i had too and it kept going into this limp mode more often each time, finally got it plugged in to a computer which gave no faults even though i had two amber lights on the dash. My mechanic said its the DPF, which is due to the previous owners only city driving. He took the DPF out and told me to go get the ECU remapped. Which i did but to no avail. The lights on the dash are now off but this limp mode has progressively become much worse to the point i can no longer drive it even a mile down the road before it limp modes itself. If i stop and restart the car its instantly resets as soon as i accelerate it happens instantly, the rev counter doesnt go above 2300revs.
What im trying to say is im fed up of garage bills, people telling me to try this, that and the other. ive spent so much on this car already im reluctant to go any further down that route, my dad mentioned swapping the engine for an old non electronic injected fuel pump, which hes had previous success.
Has anyone done this to a Vitara specifically and if so what engine and gear box etc was used?
i want a car with no electronics!!
Thanks in advanced for any feedback.

Hi xara
Do you or any friends have a fault code reader ?
I have a wireless cheap fault code reader which plugs into the OBD (Onboard Diagnostic Port) socket and I get a readout of various parameters on an android phone using Torque lite which is a free to download app.
A fault code (or codes) can usually point roughly at the problem area,not always but it is a good starting point.
You might struggle to get a 2009 car fitted with an older engine through MOT's etc
Top
Post Reply
2 posts • Page 1 of 1