Sammi out of the car port

The place to socialise, and relax, if it doesn't fit into anything below it fits here, so tell us that joke, or share that story of your last off-road escapade, but remember new comers the virtual drinks are on you!
Post Reply
2 posts • Page 1 of 1

Sammi out of the car port

Well 6 weeks in this lock down and couldn't resists trying to revive my 1992 Sammi.
I have plans to enclose the Carport with a back wall and front garage doors but to do that the Suzuki has to move out the way. It was driven into the car port over 7 1/2 years ago when it was decide that this was not a practical car for a transporting a newborn around in and there it has stayed.

My now 7 year old has asperations to drive it, plus my wife has hinted that she would love to go green laning again.

So cleared the rubbish that had accumulated around the car, got the bonnet open
Green antifreeze still in rad.
Plugs out and managed to hand turn the engine over, it was quite free
Jumper pack and a flying lead down onto starter and turned engine over no problems.
Spent an hour then finding the keys, two young boys has spirited them away to a toy box.
Checked sparks plenty of them
Plugs back in, bled the fuel back to the carb
HT lead back on and then off it went.
No hesitation, did what it was meant to do, Asian Carb ran at 1200rpm then backed off as it warmed up to 800rpm, speed changed with headlights on and there where no rattles or odd sounds from the engine
Pumped the tyres up one won't hold air but have spare.
Into gear no clutch problems, brakes a little seized but came off, but no brakes at the peddle, handbrake works and off it drove down the drive.
T box won't come out of 2h though

So next, get it into the garage and find what's survived body wise, 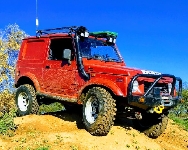 Re: Sammi out of the car port

Sounds good, nice to hear another being revived!