Heya, guys. I think it's about time I had a build thread of my own, so here it is.

The story so far:

Few years ago, bought a 1986 SJ413 for offroad only use. Bog standard, with bog standard rust everywhere. Put extended shackles and a bodylift in it, a set of s/h BF Goodrich MT's (31's) on some 8J deep dish Dihatsu rims on it, and a home-made snorkel that doesn't come out of the side of the bodywork (so it can't be ripped off by a tree): 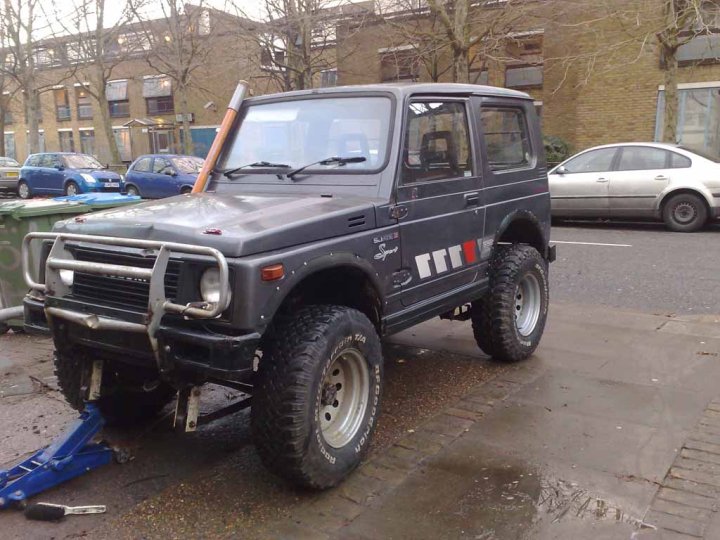 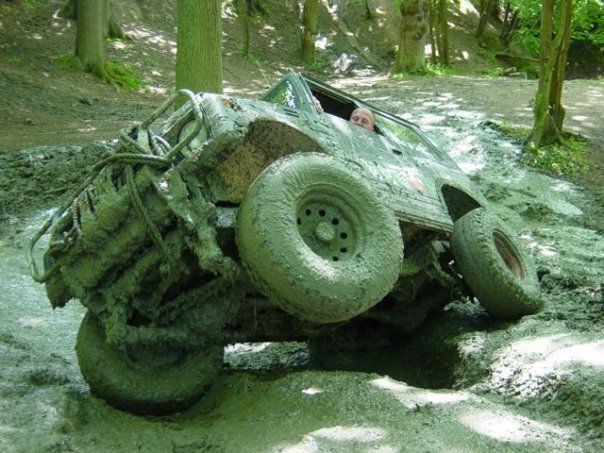 Then got a Sammy engine (G13bb 8v)as the G13a in it was smoking enough to hide a bus (not joking or exaggerating there - I actually hid a whole bus with the smoke it put out) and axles from a Sammy as they're a bit wider/more stable, SPOA'd 'em and trussed 'em, shoved 'em under the wee beastie and went back to standard shackles: 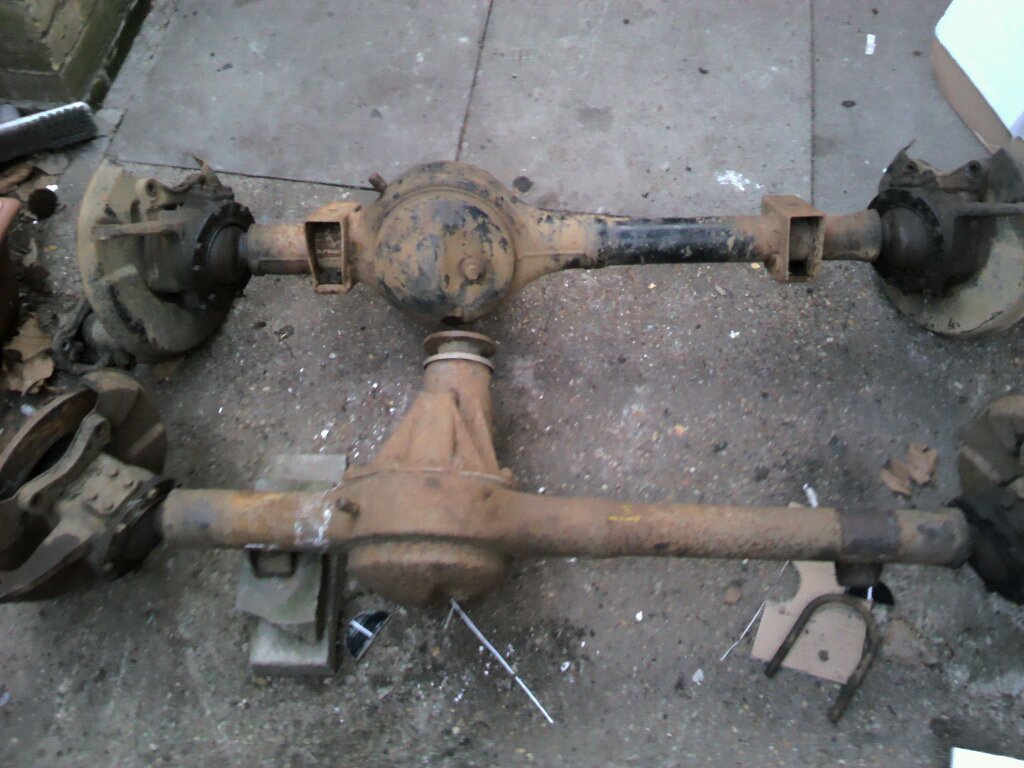 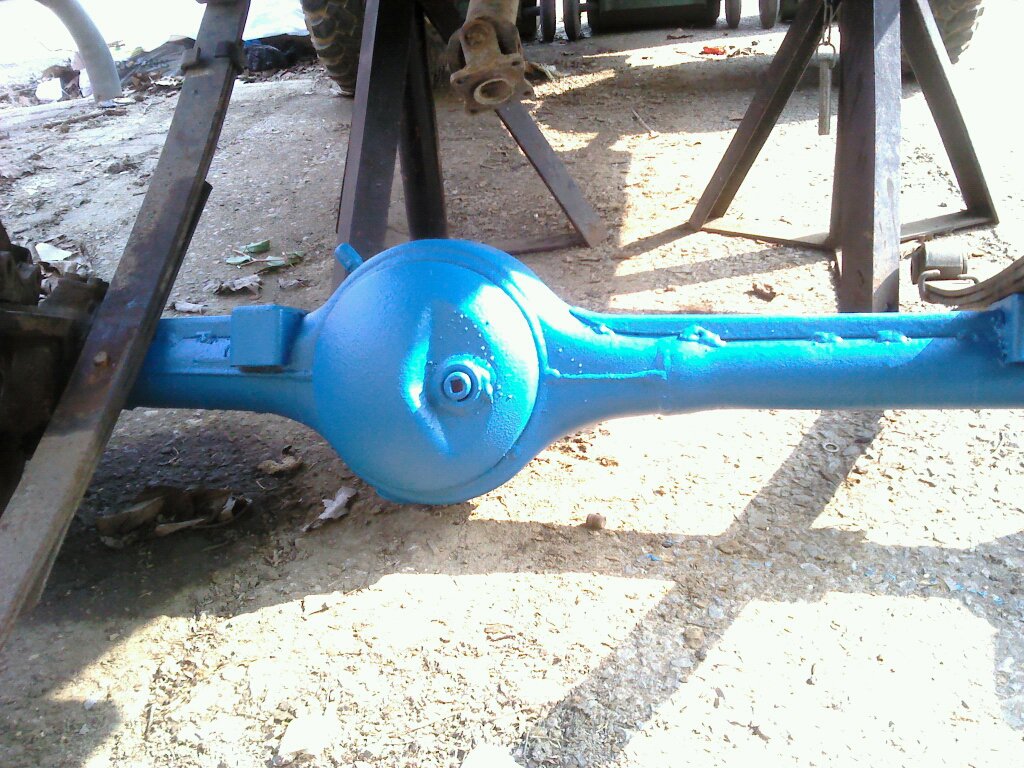 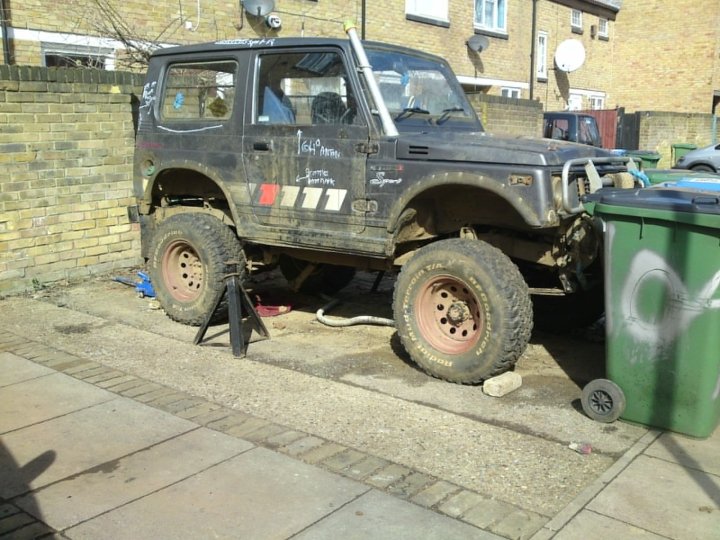 Too tall. Didn't like the way it drove offroad. So out came the body lift, my mate Scottie put it on it's side, so swapped the driver's door with one I knicked off a Sammy: 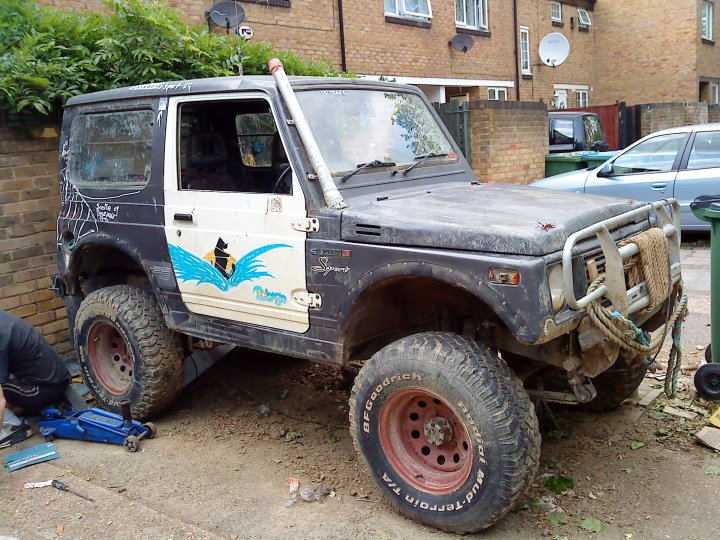 Then the neighbours granddad smashed the windscreen with a massive pole sticking out the back of his trailer, and pretended it wasn't him. Nice. Anyhow, thanks to that and malfunctioning brakes, it sat like that for way, way longer than I'd be willing to admit.

So recently I decided to get working on it. 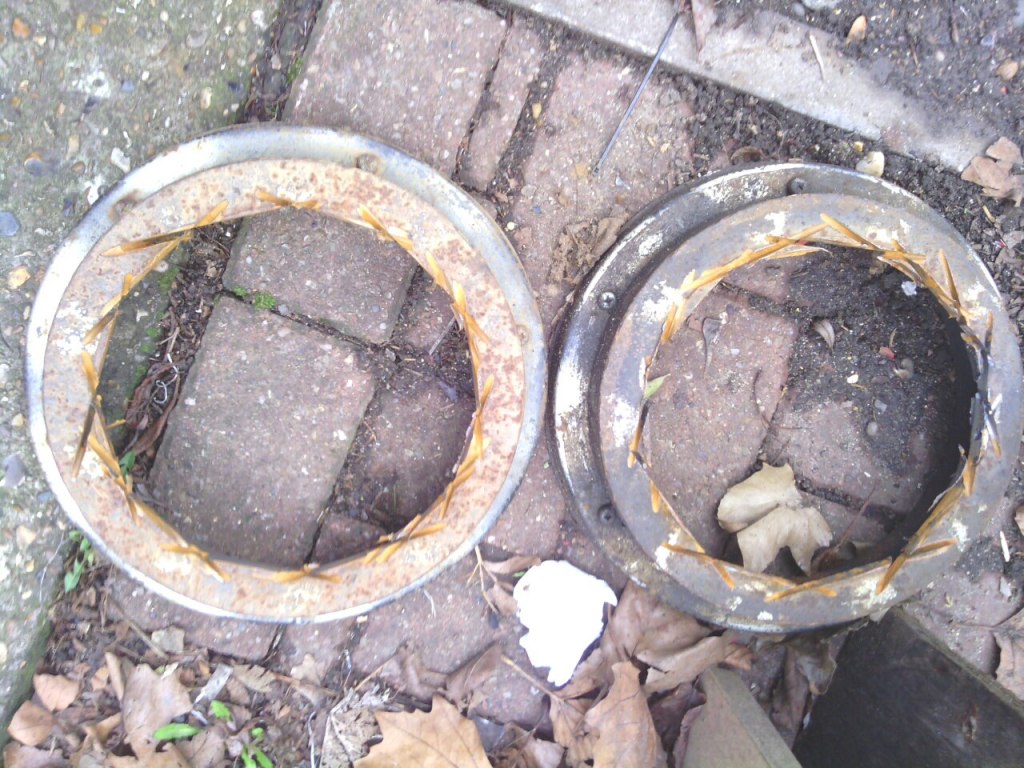 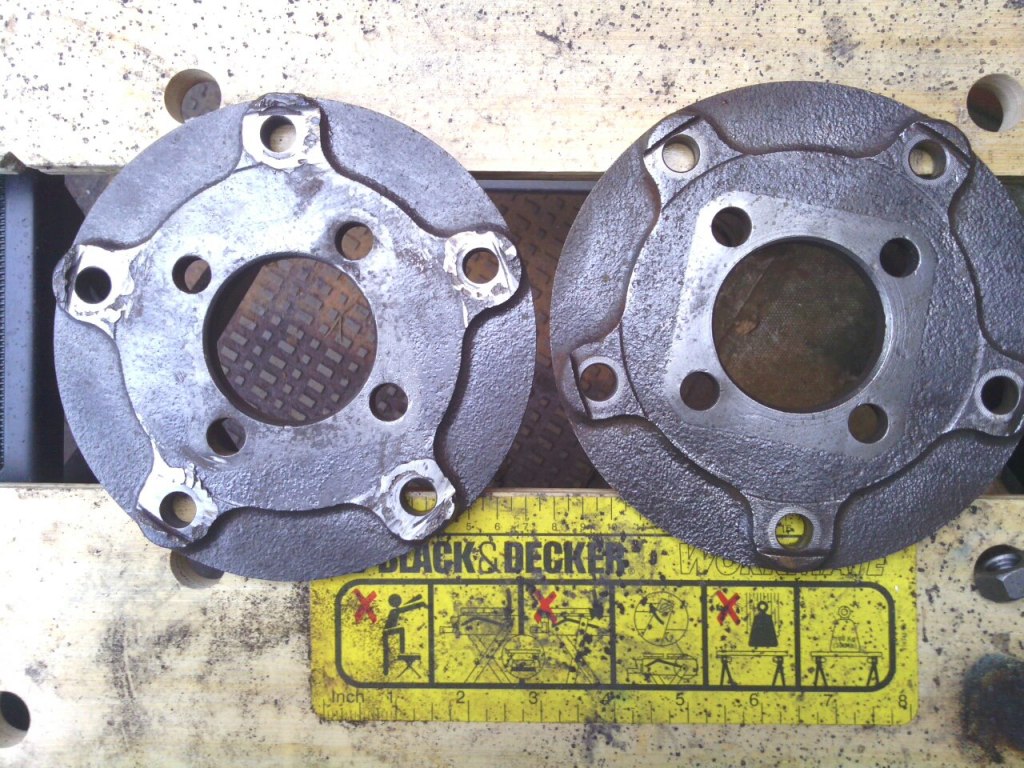 Next, recondition the Asin calipers (everything apart from the sliders and the caliper bodies are new), wire brush the crap off 'em, paint them, generally get 'em ready: 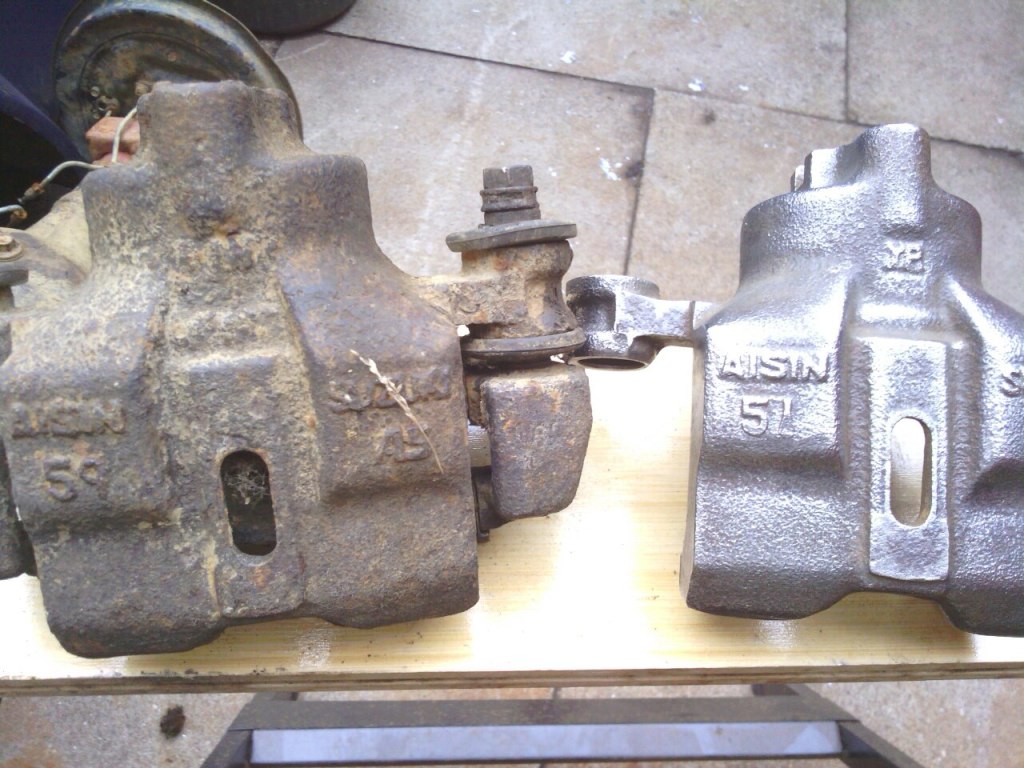 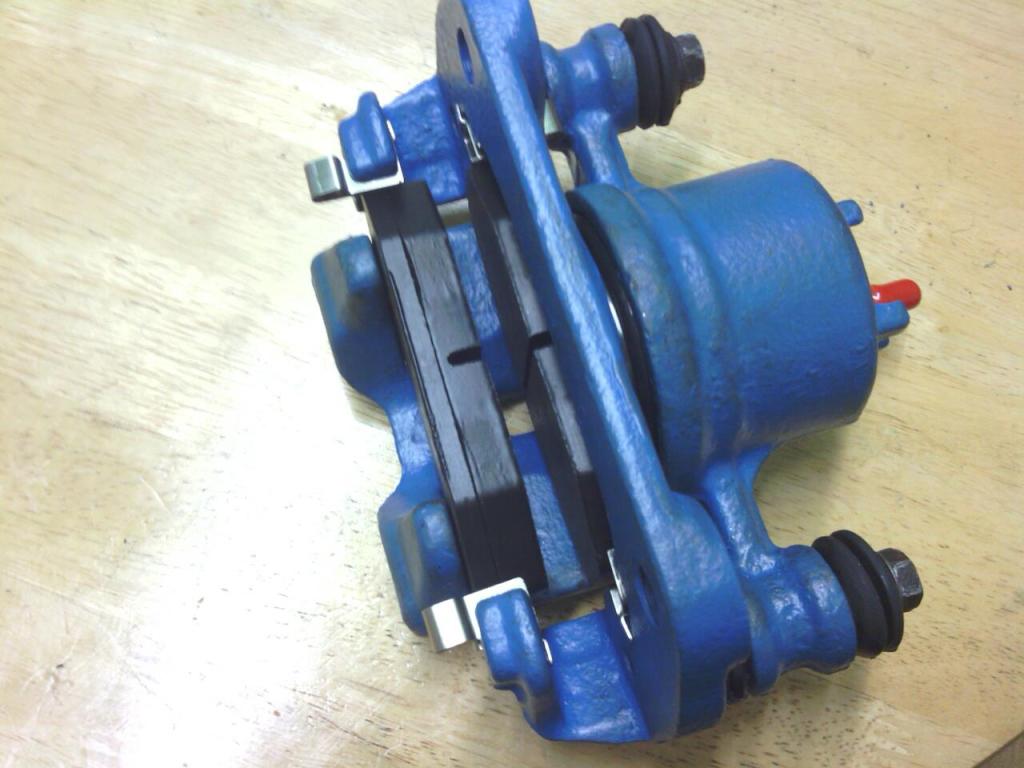 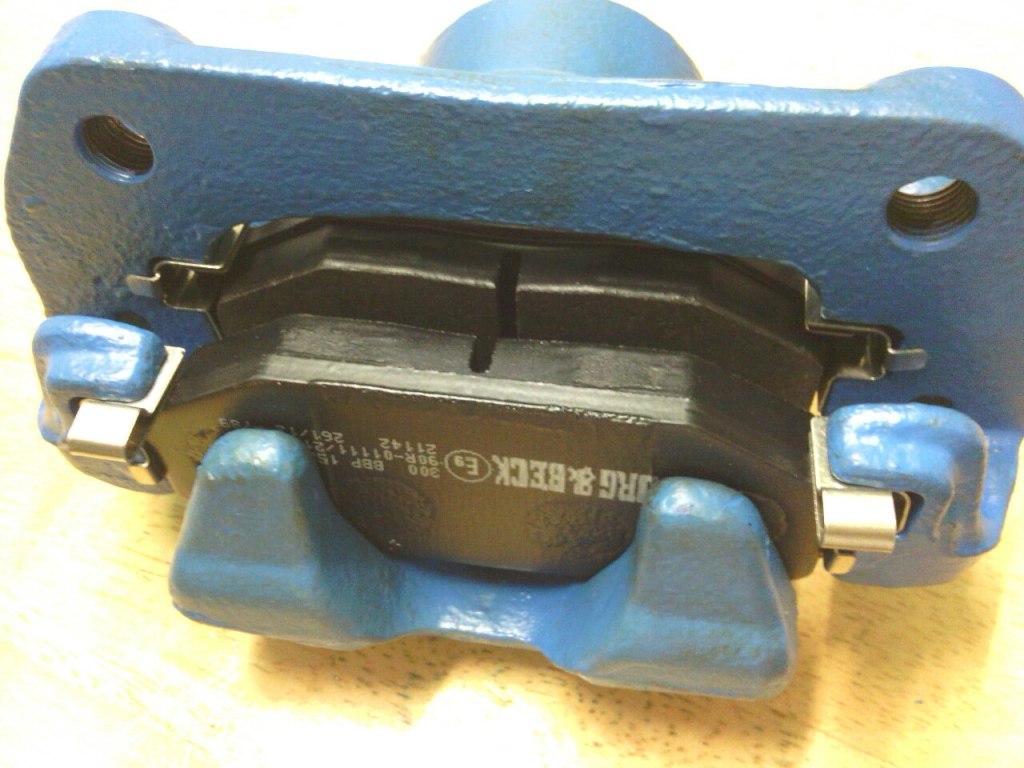 Aaaaaand that brings us up to today. Today I tore into the thing and replaced all the suspension bushes with brand new bright orangy red poly bushes and brand new shanked bolts, and got the Vitara calipers (which should never have gone on there - mistake!!!) off, and replaced them with the Asin's that were there in the first place (the now bright blue ones) and fitted new braided brake hoses: 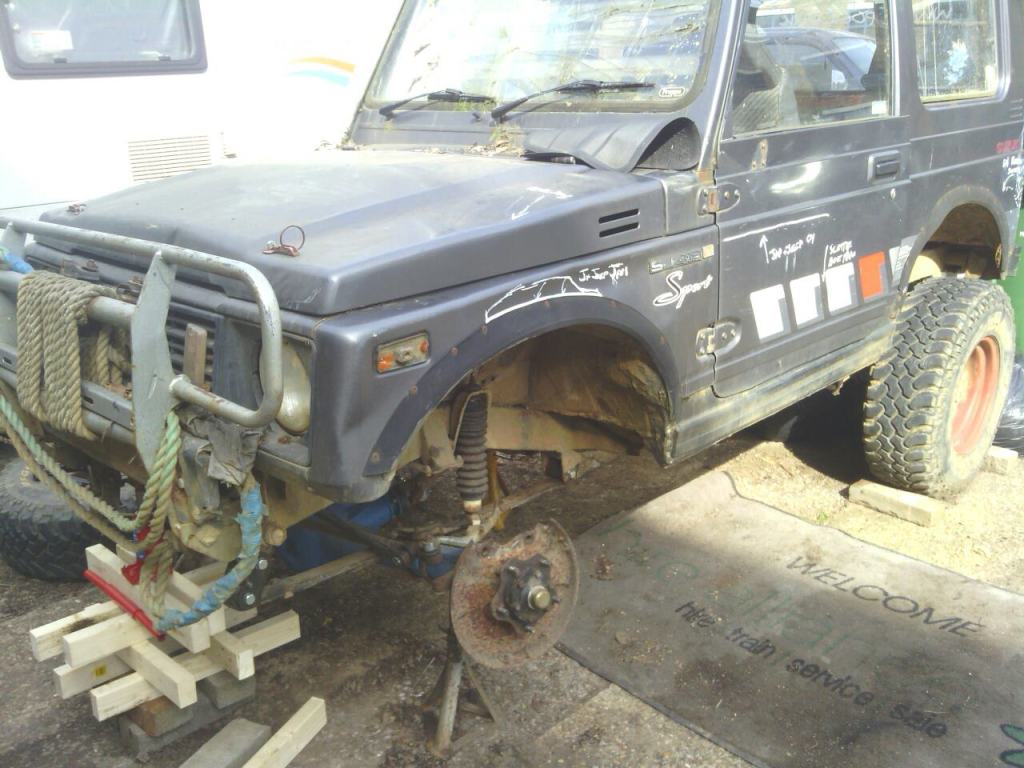 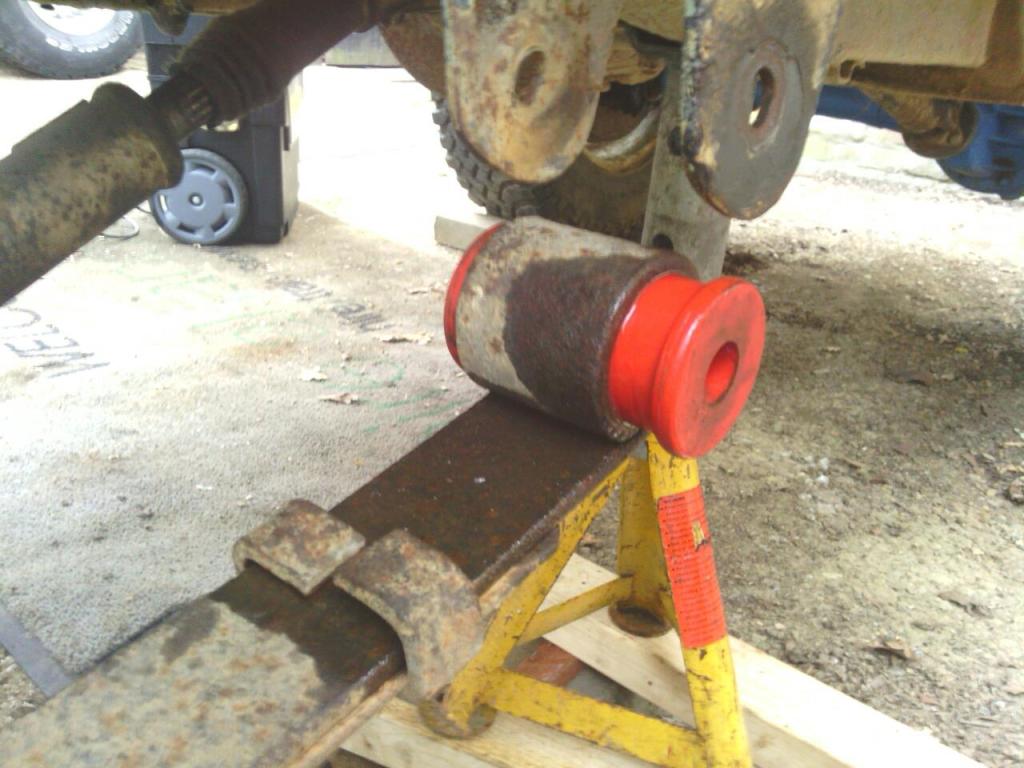 This piece of nastyness came out: 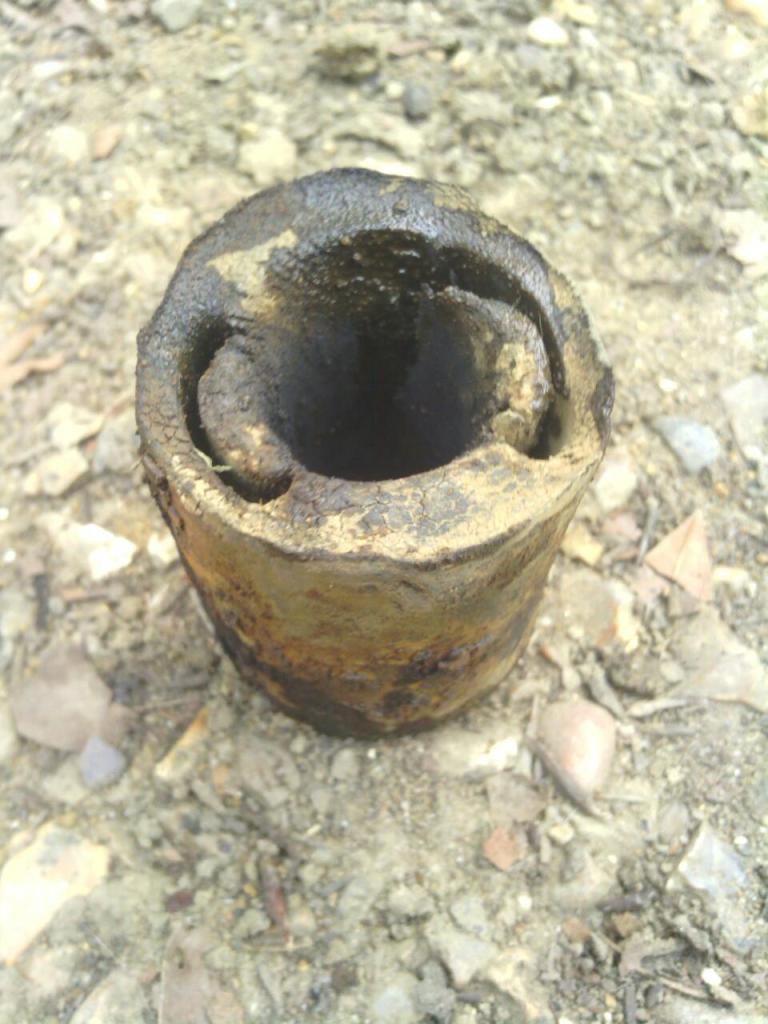 Contents of one of the brake drums: 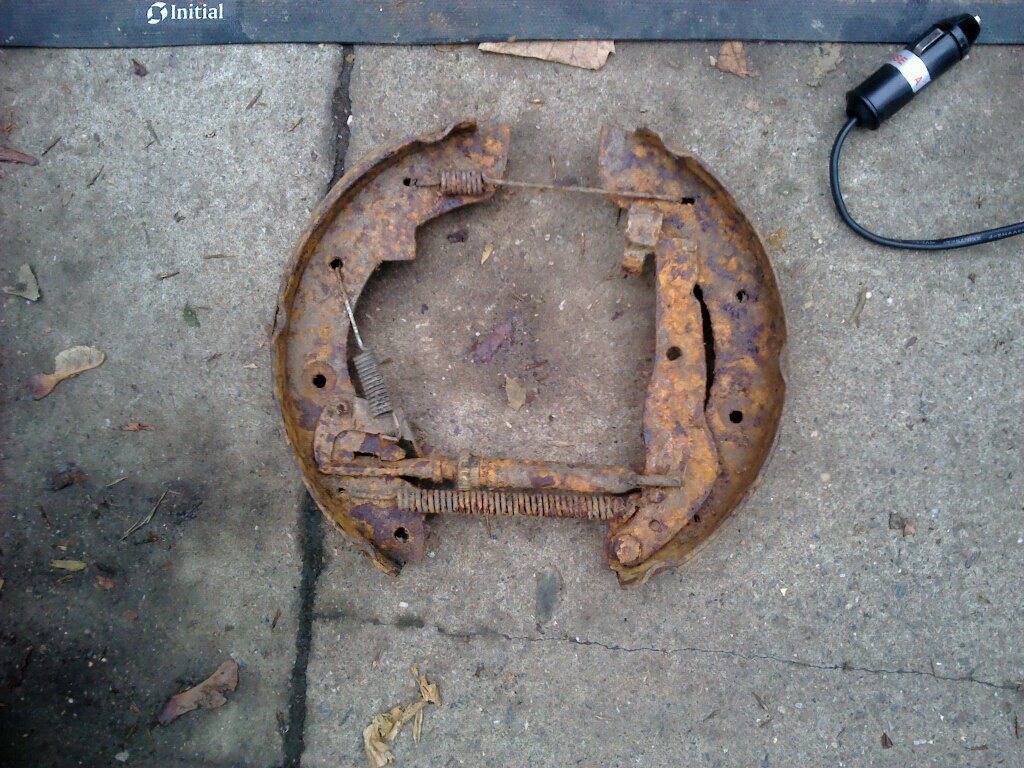 Ok, so that's us up to date. Currently the vehicle is out there on axle stands, waiting for me to cut up the backing plates (I've stripped down the rear brakes to their backing plates, but I ran out of sunlight before the angry grinder could tear down the plates into bearing retainers).

Still got to pull the caliper mounts off the front axle, cut them down, then everything should bolt up real nice. Hopefully if I get some time tomorrow, that'll get done, the braided brake hoses can go in the back (only front ones fitted so far) and then I just need to re-clean the vit brakes. 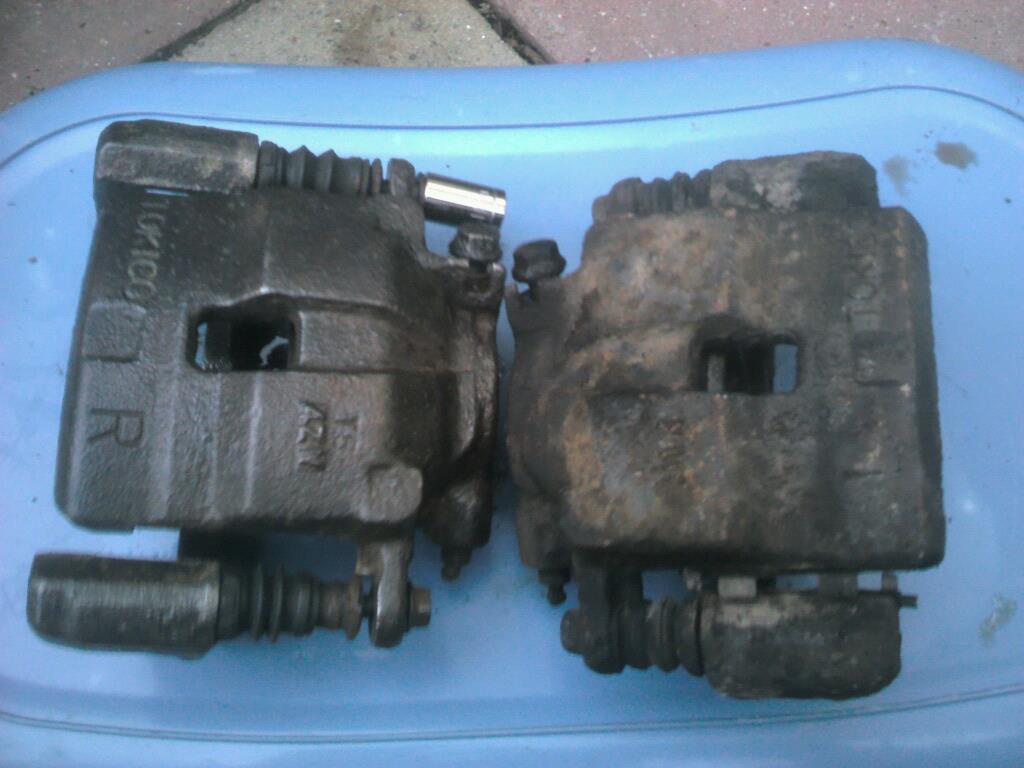 That's a "before and after" shot of me cleaning them up a few months back. I didn't paint them, I just fitted them on the front (where they weren't supposed to live, dopey me!)

Here's what one of them looked like when I pulled it after a couple of months just sitting there. Not a single mile on them - just sat in a driveway: 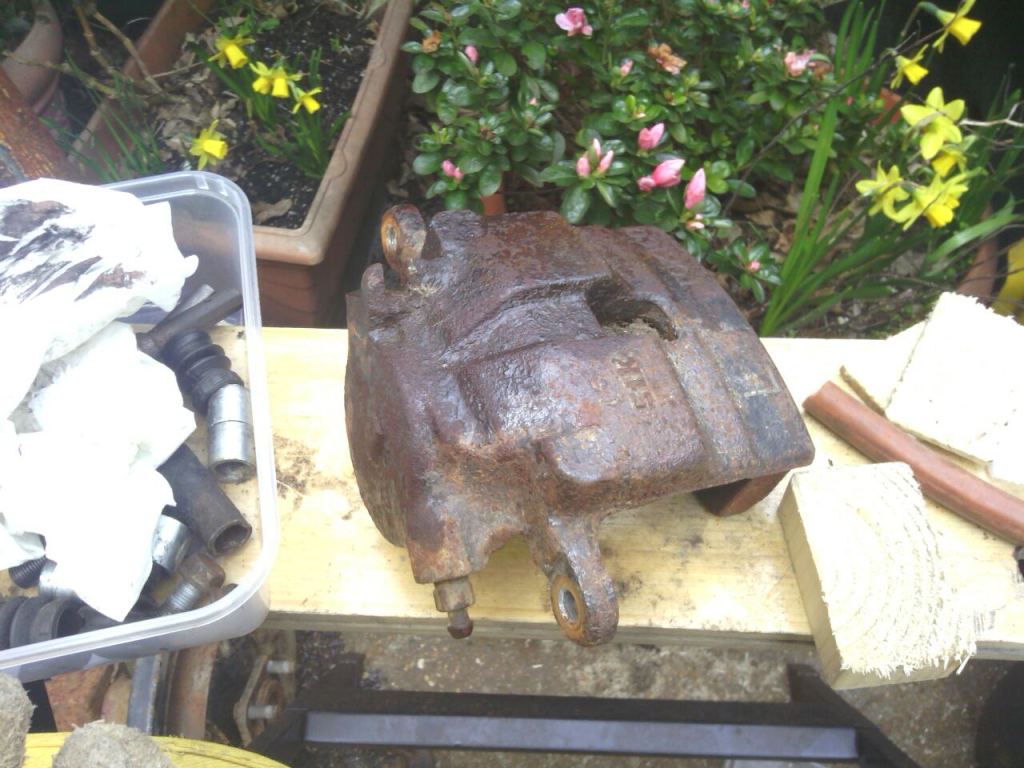 So I'll clean those up again, paint them, then I've got all new rubber boots and seals etc for them (already got brand new pads in 'em) so they'll be recon too, although I haven't bought new pistons for these like I did with the Asins on the front.

Once they're recon'd, I'll shove 'em on the back, and I should be ready to bleed the system and then she'll be driveable again - although not road legal (which is the aim of this rebuild - get 'er through an MOT!).

Oh, and I bought a set of Malatesta Kaiman's (or Kaiman Malatesta's - not sure which way around the names go) at some point: 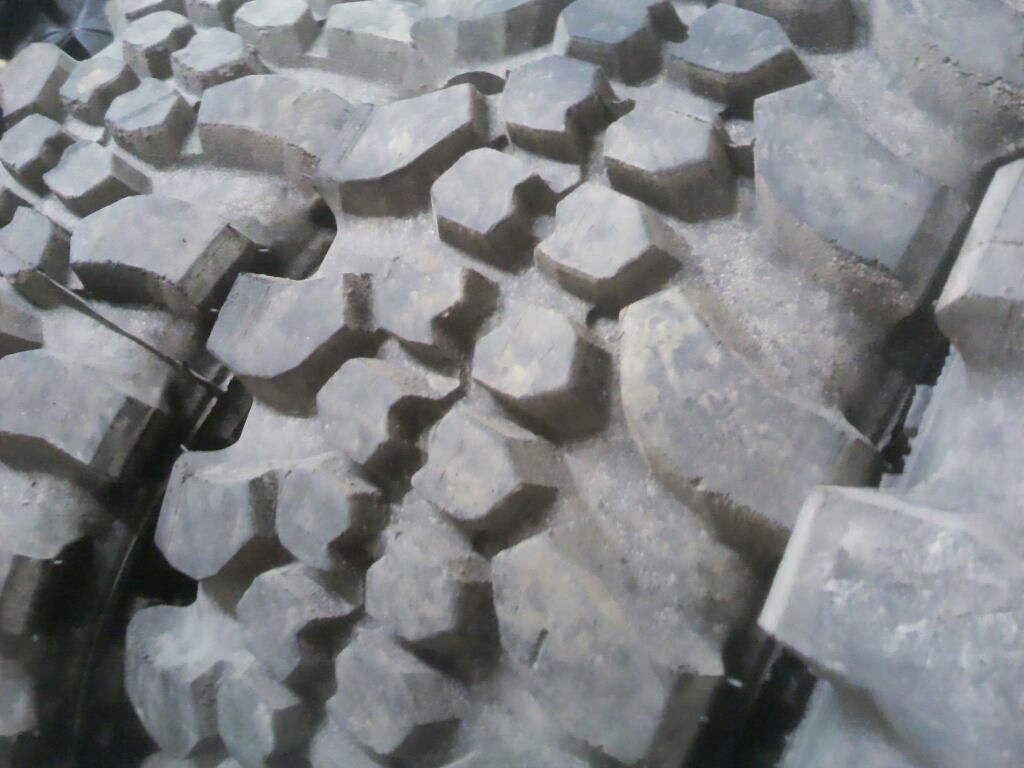 *edited to sort out the pics which I hotlinked from Facebook, and who decided to b0rk up all my links about a year later. Now hosted on photobucket.

Good to see your back on with it. I daren't say how long my tin tops been sat. Its a while. I do like the look of those tyres. I'm so tempted to get the insa turbos in a 33".

Thanks Jordi! It's a bit of a shed at the moment, LOADS of stuff to do. In fact, here's a list off the top of my head:

Looks like a damn good plan to me, I always wanted a Jago bodied SJ.

Keep up the good work matey

If it ticks over...leave it
Top 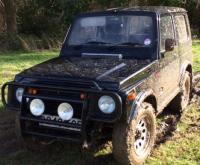 OllieSJ wrote:When are you doing the jago swap ??

I can't tell you exactly when, I have to get the wee beastie MOT'd first otherwise VOSA won't inspect it afterwards and then it'll never be road legal again.
1985 SJ413VX (SJ50V) with SPOA, rear disc brakes, 31x10.5R15 Kaiman Malatesta tyres, an MOT and a lot left to do!

let me know when you get it moted as im after a sj wing so suppose you will make it solid and i will buy it off you so i dont have to buy a new one but need its ish soon thanks ollie
Sj410Q- Spacers, Bucket seats, Su carb , Mot and Tax
Top

ahh right they did look alright in that pic will still have the body and doors etc off ya as its exactly the same as mine
Sj410Q- Spacers, Bucket seats, Su carb , Mot and Tax
Top
Post Reply
535 posts